The National Crime Victimization Survey found the lowest overall crime rate since the survey began in 1973. Since 1994, violent crime rates have declined, reaching the lowest level ever recorded in 2010. Property crime rates continue to decline as well.

Despite the falling crime rate, taking into account both violent crime and property crime, 83 percent of Americans can expect to be a victim of crime at least once in their lifetime.

‘Three Strikes’ laws mean that people convicted of a third felony receive a mandatory life sentence. The term refers to the baseball rule, "Three Strikes and You're Out." Some candidates advocate ‘Two Strikes’ or ‘One Strike,’ which generally means more mandatory sentencing, less judicial discretion, and less chance of early parole.

Mitt Romney's term ‘One Strike’ is intended to be a stricter version of Three Strikes.

Joe Biden’s “Sentencing guidelines” are another form of mandatory sentencing (using legislative rules for sentencing instead of judicial discretion).

The opposite viewpoint from ‘Three Strikes’ focuses on the increasing prison population. In this view, along with prison privatization, imprisonment has become big business, and hence subject to political pressure to increase imprisonment. In particular, black males are ever more likely to be imprisoned. 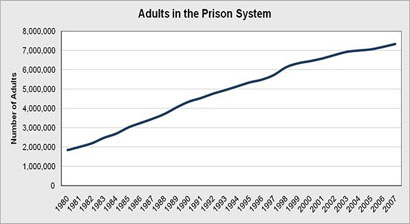 ‘Broken Windows’ laws mean that police focus on ‘quality of life’ issues as much as on crime itself. By addressing even minor crimes such as broken windows, according to this theory, a community is less likely to tolerate any crime, and overall crime rates should fall.

‘Community Policing’ refers to a policy of crime prevention replacing incident response. It is often accompanied by a ‘broken windows’ policy, or by increased police presence on the streets.

A ‘tort’ means a civil infraction as opposed to a criminal violation. ‘Tort reform’ includes capping lawsuit rewards; banning ‘frivolous lawsuits’; or some other change in civil lawsuit procedures.

Congress defines ‘Hate Crimes’ as a crime in which the defendant intentionally selects a victim because of the actual or perceived race, color, national origin, ethnicity, gender, disability or sexual orientation of that person. Hate Crimes are covered primarily as racial or anti-gay issues under Civil Rights.

Amendments V and VIII to the US Constitution

V. No person shall... be deprived of life, liberty, or property, without due process of law.... (1791)
VIII. Excessive bail shall not be required, nor excessive fines imposed, nor cruel and unusual punishments inflicted. (1791)